Should any calamity befall you or your family that changes your situation to one of survival, do you know what to do, where to go, how to get there, what to do once you get there, how to provide for yourself and loved ones or what you will need and how much? Most lack the forethought to plan ahead and prepare themselves for any likelihood other then a flat tire, and even then only because the automobile factory placed it in the vehicle for them. Feel free to read, experiment and improvise what I have put on this site to potentially help you one day. 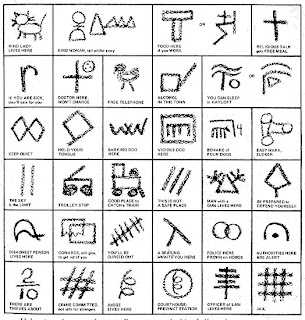 These symbols can be used today or in an emergency to
assist in finding fresh water or shelter or warning of danger. It
is these symbols which can assist that we will cover and add a few of our own as should the need arise, a pictograph language for communication is one of the simplest and basic forms that allow all regardless of spoken language or education level to quickly grasp and use. You can follow and also emplace these symbols for fellow survivors, communication or for future area or resource recognition.
You will notice that the hobo symbol system has many symbols to express the same thing so we will use them to be more specific. These symbols can be stacked to create more elaborate messages and side by side to create separate warnings or posts much like Japanese writings.

The first row covers the symbol for 'DANGER', a 'GUARANTEED' threat such as toxic/biologically contaminated water or aggressive individuals/rabble/militas. The last symbol in the first row is the symbol for a camp site. This is usually placed in an area that has some cleared space for sleeping and a stone/brick or metal barrel enclosed camp fire site. The symbol is usually placed in all likely approaching directions for ease of locating. If the area was dangerous chances are there wouldn't be a campsite marker.  If the area was safe then became dangerous later then you might hope someone would warn others by at least placing a dot denoting danger in the center where ever it is posted.

The second row contains the symbol for 'SAFE'. Usually referring to a friendly group or community or area free of aggressive animals or people or clean drinking water.

The third row starts off with the symbol for dangerous animals, usually meaning dogs. If there is a number beside it then it is the amount of such animals. If there is no number or a star then there are alot or a pack of aggressively dangerous animals that roam the area so beware. The next several symbols will help guide people to rendezvous points, caches, safe houses and such. The last symbol warns of militia or armed rabble over watching/patrolling/camping in an area in the direction of the arrow on the symbol.

The fourth row starts off with the natural disaster symbol, warning of potentially washed away roads, areas blocked by rubble or other debris or fissures and all natural hazards. The next one warns of military or police bases or camps, check points, road blocks or quarantine zones due to biological, chemical or nuclear contamination. The next symbols are used to show either the area, road, or other resource symbol is unsafe due to potential for human or animal confrontations in the area or due to terrain conditions, especially following a disaster. Notice the difference between the danger symbol, and the unsafe symbol? The danger symbol represents a 'GUARANTEED' threat where as the unsafe symbol represents a 'POTENTIAL' threat.

The fifth row starts with the symbol for thieves or raiders in the area, so keep off the roads and stay in the shadows while scavenging or traveling when you come across this symbol. The next symbol is typically one placed as a warning to all on the boundaries that the building is guarded and the occupants are armed. The third symbol here is a warning that you are potentially within ear shot of a dangerous group either rabble or organized. The last symbol of the road warns that the road is guarded by a group over watching/patrolling the road or manning a road block or traffic control check point. This symbol usually either has the symbol of a military/para-military threat or armed civilian/rabble underneath it better depicting the threat potential of those guarding the road.

The sixth row starts with the symbol telling you to defend yourself, usually meaning that the local groups are very aggressive and will shoot on sight, 'DO NOT APPROACH' for fear of DEATH! The next three symbols are to be placed near entrances of communities or camps to show some of what the community can provide either through good spirit or trade such as medical treatment, food, communication (usually telephonic hard wire land line or by satellite, cell phone) place a transpo symbol under it with either water symbol/road symbol/rail symbol or air symbol to show type of transpo, the transpo symbol denotes hard copy correspondence is the form of communication, the commo symbol above the commo symbol represents that transpo is done by animal message carrier. The air symbol above the communication denotes cb/ham radio. Other symbols on the entrance sign should include such things as water, transportation, shelter, fuel, electricity, religion, education or general trade all dependant on the community situation, location and priorities. Don't forget to place the armed area, armed building, armed civilian symbol or armed community symbol (building inside of an area circle with the diagonal armed line going through it, all at the head of the sign to help ward off potential rabble threats.

The seventh row starts with the symbol letting strangers know that, that particular house is not occupied by anyone and that they are free to sleep there or to get out of the elements with out permission. Take caution as this can be used to ambush people into a false sense of security, don't let your guard down in this situation. Simple way to determine if it is a trap is check to see if there is an external way to lock the doors such as a barricade bracket or if the inside looks like a bloody crime scene. If the windows are only partially boarded up then you are probably fine but if the windows are heavily boarded take caution. Also look for recent activity around the building such as old bodies piled near by but out of sight. Depending on the length of decay will determine the level of putrescent stench present which may be as a direct result of a disaster. The initial 2 weeks after a disaster depending on the season may be one hard to deal with due to the overbearing stench of decay. If it is winter, expect the decay to occur come spring. If a strong smell of decay is present months after a disaster, take caution entering the area. The need for caution is simple, the longer a disaster unfolds the more the situation and area changes, what was a safe haven at one time may be the den of armed rabble later so take caution when entering any derelict structure even now as desperate or homeless people following the economy's downturn may be inhabiting them. The next symbol is placed near a survival cache depicting the direction on one side to go in from the marking and the distance in paces on the other side. These caches tend to be hidden in stumps or under rocks or in small caves and such. Usually a marked trail brings them to the remote area where the cache is and are not typically buried unless meant for a knowing few in which case there would only be a cache symbol but no direction or distance. In such an instance, typically people will place an object as a marker on top of the bury site such as a large rock or several small stones circling the bury site. The next symbol is for transportation, by placing the symbol for road under it it means wheeled transportation. Place the standard symbol for water, not potable water under it designates transpo is by boat. The normal map legend for train tracks under the symbol denotes railed transpo, or if they use the air symbol then transpo is by aircraft of some sort. The last symbol of the line is that for armed civilian, this can mean a locally appointed law enforcer, militia, raider or rogue military. Essentially no one operating under a legitimate governmental authority.

The eighth row starts with the trade or barter symbol, this symbol is usually used to denote money in current hobo society. The next symbol denotes that you have or there is, potable drinking water at this location. The next symbol represents air, either to be placed above the transportation symbol, the communication symbol, the natural or military hazard symbols or above the danger or safe symbols to show whether the threat is chemical (military hazard symbol), biological (natural hazard symbol), or radiological (danger symbol) hazards or that they are safe. Communication symbol with the air symbol above depicts radio is the form of communication available. The last symbol of the line represents shelter is available but owned or controlled by an individual/group or community to be rented or worked for.

The ninth row starts with the symbol for a guarded area and the following show the parts to it. Draw a diagonal line through virtually any other symbol and you are saying that that is guarded. Like wise place certain symbols inside the area circle and you are combining a whole group of areas by type together as one. Then place a diagonal line through it and you are saying that all of those areas are guarded. The last symbol is the symbol for 'FREE', placed either above, inside or below another symbol.

The tenth row shows the symbols for road, railroad, weapons and fuel. To denote that an item is not allowed or not available just place an area circle on the symbol but with the symbol going outside the boundaries such as in the 'Do not go this way' symbol. Stretching outside the boundaries of the area circle denotes that it is not allowed or available but placing it fully inside the area circle denotes that it is allowed or available. Fuel type often is determined by placing an 'A' for alcohol, 'D' for diesel, 'G' for gasoline, 'K' for kerosene, 'P' for propane, 'N' for natural gas and 'O' for other, with what ever is the most abundant the letter is placed inside the bottom bubble, the other fuels if there are any either go to the left, right or both sides of the bottom bubble.

The last row shows symbols for electricity, work available, religion, and education which can also be depicted on signs to attract other survivors. Look around your city, train tracks, barns and woods, you may be pleasantly surprised to find old and new hobo markings.

NOTE: Since hoboes don't typically travel very far, expect many different variations of these symbols from the west coast versus the east coast.
Posted by Vault72 at 11:37 PM

What do you believe will cause the downfall of civilization?